TCP/IP Model is, along with the OSI model, one of the models used to describe computer networks structure. It is composed out of four protocol layers: network access layer, Internet layer, transport layer, and application layer. It is a base for today's electronic communications, as it is the base for the Internet's structure.

You can read more about the OSI model here. 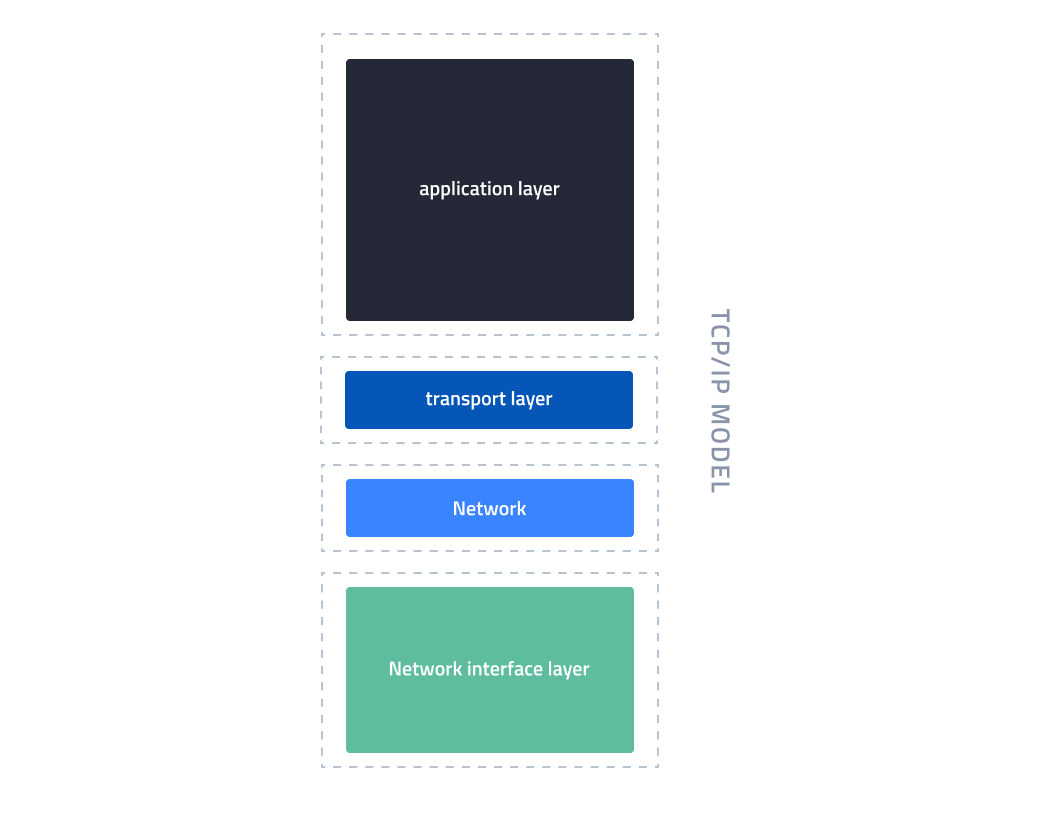 The name TCP/IP comes from two protocols, which are the basis for this model: TCP and IP.

TCP (Transmission Control Protocol) allows transporting data between processes on different machines. It guarantees the high quality of packets transported, ensuring they are sent in the correct order and without duplicates or losses. Unlike the UDP (User Datagram Protocol), it requires both sides to accept communications (so-called three-way handshake).

IP (Internet Protocol) is responsible for two things. The first one is packing data into datagrams (this action is called encapsulating), separating them into smaller segments, and reassembling them. Another one is addressing those data - the address to which the data is sent is called the IP address. This functionality allows communications of computers from separate networks. IP protocol does not ensure high quality of data sent - for that, the TCP protocol is responsible.

Currently used is the fourth version of the IP protocol, i.e. IPv4. It allows addressing about 4,3 billion devices - not enough for today's needs. Currently, the RIPE organization assigns unused IPs to new devices. Nevertheless, to increase the number of addresses available, there are plans to introduce the IPv6 protocol, which allows addressing about 3.4 x 10^38 devices. It is not possible to quickly change from IPv4 to IPV6 - the second one was created without compatibility with its predecessor, to ensure better quality. Those protocols de facto create two separate networks.

In the next part of this article individual layers of TCP/IP model will be described.

The lowest layer is made out of the network's physical elements like cables, switches, or routers, and communication protocols managing them.

This layer allows connection between machines from separate networks. In this layer operates the IP protocol - it addresses, separates, and reassembles packets.

The transport layer is responsible for connection initialization and termination between hosts, and, if implemented in protocols used, control, error-correction, transmission control, and quality of data sent.

Data transmission can operate as connection-oriented communication (in case of TCP) or not (in case of UDP). The difference is that the first one requires mutual agreement for data transmission, and in the case of the second one, data will be sent without the addressee's agreement.

In the highest layer operates software used by the user, like browsers and communicators. HTTP, FTP or SMTP (protocol responsible for e-mail) are used here.

Comparison between TCP/IP and OSI

TCP/IP ich is much simpler than OSI, as it has different premises. Despite that, layers of those models are comparable.

If you want to know the OSI model better, read this article.

Previous
Rebranding of Skynode.eu to Mevspace.com
Next
TCP protocol
Contents